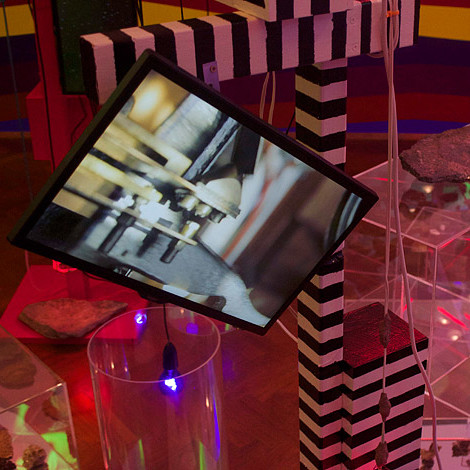 The Aesthetics After Finitude conference organised by XHums and NIEA was a great way to kickstart the year. What was most exciting about the conference was the opportunity to experiment with ideas as they moved across and between philosophy and art. I decided to focus my thoughts how it might be possible to bring together concepts in process (philosophy) that although emerge from distinctly different concerns seemed to share ways of becoming across time and space. My abstract suggested that it was indeed possible to witness the vibrations across the centuries.

“Daily experience teaches us that various species change into each other: earth changes into water, water into air, air into fire or ether and, vice versa, fire into air, air into water, etc., and these are nevertheless distinct species.” Anne Conway, (1631-1679) The Principles of the Most Ancient and Modern Philosophy, 1996 , p.34.

This paper places in conversation the vitalism of Lady Anne Conway (known to philosophy for Leibniz’s adoption of her concept of the monad) and some works by Australian artist Mikala Dwyer. The aim is to see if an alliance between a processional concept of nature and a rematerialised concept of the object might offer new ways to understand ecological and ethical relationships between contemporary art and its viewers. In drawing a long thread between the late 17th Century in Warwickshire, England and three contemporary artworks exhibited recently around Sydney Harbour, Australia I suggest that a selective reading of Conway shows her to be a contemporary philosopher of matter, and equally, a deep look at Dwyer’s artworks shows them to be based in pre-enlightenment ideas of the energetic transmutation between bodies.

Mikala Dwyer’s “The Apparition of a Subtraction” (2010, 17th Biennale of Sydney) fuses sound, smoke and stone in a séance for Cockatoo Island. The work produces a smoky apparition viewed from the point of view of an assembled circle of stones. The apparition is the result of Dwyer’s carving out of negative space in such a way that a sense of presence is doubled by passing through absence. Dwyer’s “The Hollows” (2014, 19th Biennale of Sydney) also invokes a supernatural presence. Here, Dwyer sculpts air into huge material forms at once floating and weighted by gravity.

At the centre of Dwyer’s works is an attention to material transformation; a concern with vital and perceptive presence that can never be reduced to mechanical relations between bodies. In the most recent work “The Garden of Half-Life” (2014, University of Sydney) Dwyer reenergises an archival collection of geological remnants, some of which are older than the earth itself. Conway argued that there was no such thing as dead matter, only matter in which the soul was transforming into a new material by continuously travelling up and down a dynamic, energetic and infinite staircase. In an explicit challenge to Descartes’ mechanistic models Conway argued that the ontological status of matter as dead could not be sustained when matter is understood as vital and perceptive. Instead Conway demonstrated that if matter were dead it would not be able to be penetrated by other matter. Her examples are abundant: although it may be true that iron cannot be penetrated by an ‘equally coarse body’, she writes, in-fact ‘subtle bodies such as fire’ can completely transform it.

In folding together Conway’s monad and Dwyer’s vitalism this paper uses a speculative aesthetics to show how Dwyer offers a porthole through which 21st Century viewers can witness the discovery of astounding and productive forces at the edge of 17th Century matter. In so doing, I trace one small way in which resonances within natural philosophy, as articulated before the dominant mechanisms of enlightenment rationalism, are returning as examples of ‘immanent naturalism’ (William Connolly, 2002) in contemporary art.