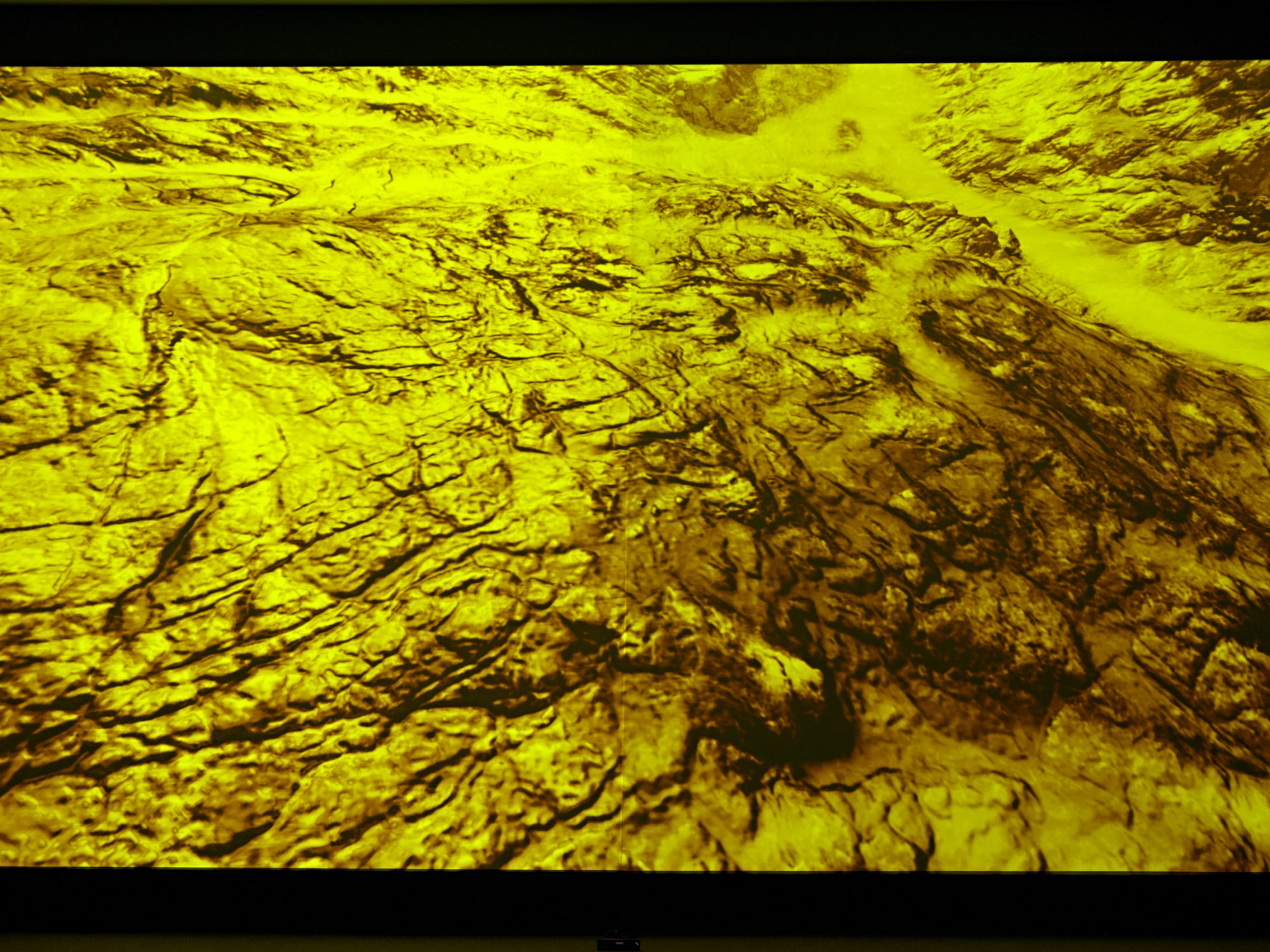 I presented today at the AAANZ conference in Canberra.  Together with Bridie Lonie and Louise Boscacci I convened a panel Affect, Aesthetics and Capital: Art History and Climate Change. We prepared six short papers addressing climate change from the perspective of artists and writers, and had just enough time for the beginnings of a roundtable. Jo Law talked about our expectations around a ‘normal’ sunset;  Bridie Lonie introduced the work of Helen and Mayer Harrison; Fernando do Campo talked about the colonising force of the House Sparrow; Tracey Clement discussed maps of drowning worlds, and Louise Boscacci touched lightly on the affective memories of  So many more conversations to be had here, and we hope to continue them into some of  MECO’s work next year.

My short paper is copied below – it will form the basis of another longer piece I’m working on thinking about geology and planetary aesthetics.

This is a short paper in four even parts. The stories it tells are of engagements with artworks that respond to this particular moment in the history of the earth. In telling the four stories of encounter, I hope to present a critical aesthetics for the Anthropocene: a way of thinking new ecological imaginaries through art history and practice.

Like that of previous mass extinctions the signature of the Anthropocene appears in the geological strata: in the ice cores of the rapidly melting Arctic, the agricultural sediments accumulating in the Yellow Sea and the shifting of atmospheric gases in Antarctica. Scientists read these geological and atmospheric remains as evidence of a dramatic shift in the earth climate, and as I follow their arguments and study their images I find myself employing the critical skills of art history. In this context, where we need images to be more than studies in form, the question I keep asking is: “How does art history help us to reimagine Earth futures?[5]” My discussion travels from the challenges of geology in motion (affect), to the problems of taxonomy (we can call this capital), and ends with a cultivation of the planetary as an impossible landscape (aesthetics). Human activity on the planet has left no site untouched. A planetary aesthetics is about naming this catastrophe for what it is and thinking about what art history can do.

To claim a planetary aesthetics, as Gayatri Spivak says we must, is to turn to the existing models of nature and the earth, and questions their very foundations. If art is a speculative fiction, it also encourages the formation of other fictions. Art history then is a critical fiction formed on top of other fictions, and this is its power.

In Christchurch New Zealand in September 2010 the earth gave one of its necessary shudders. Amidst the long sequence of aftershocks, Australian artists David Haines and Joyce Hinterding made recordings of the earth at magnitude. They used these recordings to think about the “strange dynamics” that exist under the quakes – dynamics that are about the relationship between humans, their living systems, and the planet. In the interactive installation Geology (2015) Haines and Hinterding offer a sublime immersion in a land wracked by earthquakes and electromagnetic energies. Standing in the cavernous gallery we enter into “circuits of force beyond [our] own organic networks.” Earthquakes are natural circuits of force, their impacts last on in our bodies through what Zita Joyce calls “body energies” where the residual energy of the earthquake becomes an affective way of knowing a place. Haines and Hinterding entice us to use our bodies to navigate through a world made both familiar and abstract. I wonder if by forcing us into environments that are just ever so slightly out of reach, that they also suggest one way to think about living in the Anthropocene.

I’m sitting in the NSW State Library and reading an article about Korean artists Moon Kyongwon and Jeon Joonho’s El Fin del Mundo (2012). The article quotes a character from the film: “I can’t forget that moment. My life was never again the same. Now I can dream of a new world. My future will reflect this.” I’m confused. I have watched the video project over a number of years, and can never remember anyone speaking. I can recall voices inside my head as I followed the actions of the two characters, and their respective gleanings: the white dog found beside the dumpster and wheeled home in a broken shopping trolley, the Christmas lights first as record of a recent event, and later as mysterious artifact, the carefully plotted botanical specimens reduced to symbolic hereditary molecules but I don’t remember anyone speaking.

Instead I shut my eyes and imagine this world of techno-materials, monocultures, aluminium, concrete, and plastic. The story of the end of the world is one part of a ‘fantastic disaster’ Moon and Jeon have constructed as part of their larger project News From Nowhere. The artists say that the work begun with “contemplating the social function and role of art.” It’s what artists do, and often art historians find ourselves doing the same. We tell stories of the art of imagination by describing the work of others.

Part of the thrill of thinking about the end of the world is in imagining who might be left holding the keys to the archive. Moon and Jeon’s new work The Ways of Folding Space & Flying (2015) suggests that the end of the world might not be so immediately disastrous, but the result of a slow sludgy sinking into earth. The Ways of Folding Space & Flying relocates Venice into an unimaginable future. Once a war machine born from necessity, Venice the art machine is now dependent on hoards of tourists. Here, after the great flood, the only remaining vestige of the Giardini is the Korean Pavilion– a laboratory for hyperreal archaeological investigations.

The room hums with air conditioners that breathe on our behalf, from inside and outside we watch a solitary woman (whose ship this must be) as she drinks purified water, exercises in a human hamster wheel, and scrolls through datasets of a past world. She is very alone. We are caught in a mirrored room of fractured images. This is a survival raft, a space of comfort and security. I could list more things, but I’d be adding them in arbitrarily. The strange child who sat beside me and described the game on the computer screen in a language I could not understand. Henry James’s stories reflecting off the water on the way home from the biennale, and the dedication of the artwork to the father of the super information highway, Nam June Paik. The artists say that the work is designed to “make sense of what we perceive as a fundamental function of art in the increasingly uncertain and precarious environment we are collectively facing.” This is the future distracted by the future; the institutional structures of capital will need to turn elsewhere in order to respond to the sinking of the island.

Gary Genosko suggests the planetary is about turning to “the new fundamental elements of a contested planet” he calls these “new” four elements: earth, fire, air and water. Of course, they are not new at all, but the necessity of reframing our understanding of them inside the Anthropocene is. Earth is understood by flying in an art gallery. Fire and air, the age-old symbols of disaster, now understood through their aftermath. And water. In Venice, St Mark’s Square floods just slightly more often than before. The three works discussed here have challenged me to confront these four elements of the Anthropocene. They also force a redefinition of the Anthropocene as more than climate change, species extinctions, agribusiness, the ever-expanding hunger of capital, and small local transformations. The Anthropocene is a way of experiencing, of imagining and understanding the planet at scale.

By presenting us with haunted earth futures, Haines and Hinterding, Moon and Jeon invite us to imagine a new kind of transformative planetary aesthetics. Or as David Haines says, art helps us see “the world as an abstracting machine.” Like the quake energies explored by Haines and Hinterding, it takes us a long time to synthesize any relationship with a changing planet. One way is to think of the Anthropocene as a slow slippage: there are small moments where we scramble across terrain that has only just revealed itself, and others where we sit stunned by the enormity of a historic city sinking beneath the lagoon.

Ethnographer Anna Tsing notes that today we operate in a world of friction, where edges never quite meet comfortably. Art history operates at this edge. Those of us working alongside the practices of art do what we do best: we imagine and describe what we do not yet know.