In July 2016, I presented a paper at the Anamaladies Conference hosted by the Human and Animal Research Network at the University of Sydney. 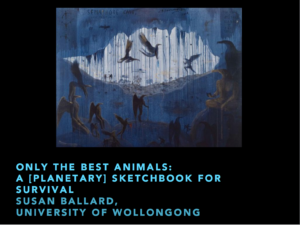 I was keen to test the idea of madness as a kind of blindness to species, and also to tease out the relationship between the human and animal, by suggesting an interspecies understanding of the current climate crisis. I also wanted to try to generate some kind of cabinet of curiosities (to echo the madness of collecting that I think is implicit in any decolonial understanding of interspecies relationship.) The paper was a lyrical meditation on death, madness, and the loss of species. My hope was that perhaps by sketching out a history of  animals and their modes of survival we could possibly gather some techniques for addressing the next great extinction event. The paper was told as much through the images as through my words. I ended with Jinyi Wang and Nathan Hughes’s incredible interspecies communication object that I saw at ISEA Hong Kong.

There is madness in extinction. The horn has been removed from the last male northern white rhino on earth and he has two armed guards 24hrs a day. The huia in New Zealand were killed off by an aesthetic desire for white-tipped tail feathers in Victorian hats. We fear the extinction of rhinos, we mourn the extinction of the huia, yet its difficult to gain serious traction in a conversation about the extinction of the dung beetle. If we are going to address the very real impacts of the sixth great extinction, we need both madness and a critical aesthetics that moves beyond the affective power of ‘nature’. This paper extends the tendrils of madness and extinction into a history of art. It does this by placing in conversation Donna Haraway’s When Species Meet, Elizabeth Kolbert’s The Sixth Extinction and a selection of artworks by Francisco Goya, Leonora Carrington, Diana Thater, Shannon Te Ao, and Céleste Boursier-Mougenot. I show that it is artworks that open up thresholds between species, madness and extinction; meeting points at which we test what is no longer acceptable: the boundaries of survival. 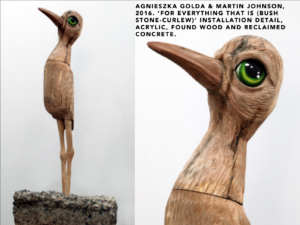