Seoul is a city. On the exhibition walls at the Seoul Museum of Art are large vinyl letters containing excerpts from an interview between Hans Ulrich Obrist and Cory Doctorow. I can’t remember if this was on the wall but in the same interview Doctrow says:

“Realism for me is a great tool to show how weird something is. There is nothing so weird as something weird placed among the banal. Realism is a great way to juxtapose the thing that falls our of comparing two things that you didn’t know you should be comparing.” (Spell on You: Media City Seoul catalogue 2012, p.292)

Seoul is a real city. There is no greater juxtaposition than the one between it and the not-quite-city I currently live alongside. Wollongong is banal, Seoul is not. It is also weird, Seoul is a different kind of weird; unfamiliar, challenging, real. In thinking about cities and banality and realism I find myself in Seoul to look at media art. In front of the museum part-time warriors with blank eyes gather crowds to reenact on the hour every hour a performance noe quite remembers having seen before, cameras pose desperate to grasp at the romantic grandeur of the Joseon period. Inside the gallery reality takes over.

Spell on You is the 7th MediaCity Seoul Biennale. It is one of the few international biennale determined by a particular definition of media (art). This is not a biennale of painting (although there are paintings) nor of photography (of which there are numerous examples) and it does manage to side-step the trade fair particularities of media art. I arrive troubled by thoughts of media art that continues to distinguish itself from ‘art’. MediaCity Seoul doesn’t solve my anxiety. Concerns with social media technologies, networks and systems, and the whizzbang wonder of new devices are all present, but I’d expect this kind of innovation and reflection at any international art biennale. What useful specificity does the label ‘media’ art add?

This top ten is marked by the slow drift of time spent alone in a gallery. 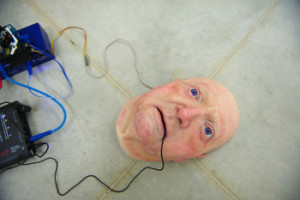 1. Nathaniel Mellors (UK) The 7 Ages of Britain Teaser 2010.
Blue-ray full HD video projection with sound, 4mins.
I am part of an artwork. Absurdity. In the modern age it is the constructive tones of the made-for-TV documentary that offer a ray of hope amidst the sludge of a dying empire. 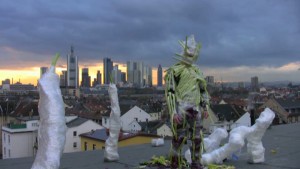 2. Dennis Feser (Germany) Vertical Distractions 2010.
Film, 4 mins.
Somewhere in Frankfurt there is a man made from celery. A literal cos-player oscillating between man and vegetable he stalks the rooftops pausing only occasionally to replace broken limbs. He is organism in motion.

3. Adel Abdessemed Mémoire 2012.
Video on monitor, colour, sound. 20second loop.
Teaching apes to spell. Once they know how, they can tell us how to stop committing atrocities. Adorno rings loud here:

“I do not want to soften my statement that it is barbaric to continue to write poetry … But … suffering also demands a continued existence of the very art it forbids; hardly elsewhere does suffering still find its own voice … The most significant artists of the period have followed this course.” (Adorno 1992, p.87-8 in Kyriakides 2005, p.442) 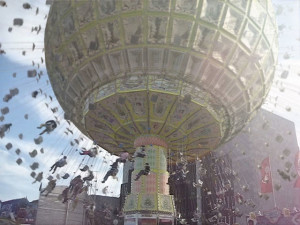 5. Ryota Kuwakubo (Japan) The Tenth Sentiment 2010. N gauge rain and train, various daily objects.
When objects become strange they begin to incorporate other kinds of creatures. In The Tenth Sentiment the closed system of train and track offers a special kind of shadow play where cities formed of pencils emerge and become points in motion. Kittler says that “a medium is a medium is a medium. Therefore it cannot be translated.” (Discourse Networks, p.265). Kuwakubo eschews media, translating objects via their material potentials.

6. Ryoji Ikeda (Japan/ Paris) data.matrix[nº1-10] 2009. Audiovisual installation, 10 multi-projection.
Frustratingly nonimmersive, nor even absorptive Ikeda’s 10 plinths stand like sentinels in an overlit room projecting nonsense onto the walls. Blinkered to each other and with their backs to me, they seem like horses at the starting gates. I find a small space in a corner and try to listen. 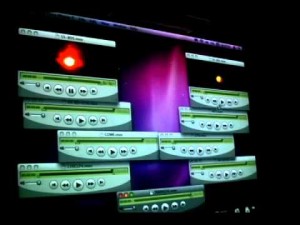 7. exonemo (internet) DesktopBAM 2011. Computer installation with automated mouse cursor, projection, sound.
The criteria for AI should include a capacity for boredom. Only then could the particular kind of technonature called cursormouse be able to dream of independent performances tapped out on a desktop. Alone and left to its own devices the cursormouse travels the desktop surfaces of a techno galaxy. For more see http://www.frequency.com/video/exonemo-desktop/33724542 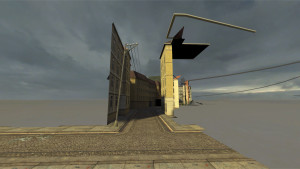 8. Robert Overweg (Netherlands) The End of the Virtual World 2012.
The banal world of gaming gets weird at its edges. For a while I traced the edges of objects in google earth. Here Overweg finds the drop off points where the game world simply ends.
9. Jae-eun Choi (South Korea) 37º56.42 42’N, 97.4414′ E 2012.
Mixed media, printer, camera, paper roll, x 2 computer.
A computer watches clouds. Others have watched other clouds (see http://cloudy.halo.gen.nz/about). This computer prints what it sees, leaving a scattered index all over the floor. 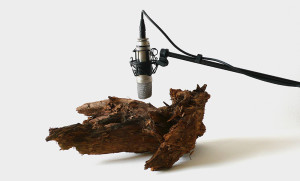 10. Zimoun (Switzerland) 25 Woodworms, wood, microphone, sound system 2009.
HD video loop.
Just because it is louder does that make the sound real, or does it remain the sound that I imagine it to be?

The spell of the city remained outside in the dreamspace of travel. The exhibition was comfortable. Real.