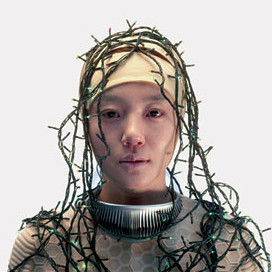 Before I went, I had heard stories of the dis-function that had permeated this Biennale. For many it had became a record of how collaboration can never be enforced, but emerge. I was curious to see in what ways I could pick the curatorial voices, whether the experience of being a  visitor would be challenged by the behind the scenes events. I did not need to wonder. Different floors of the galleries behaved like discrete exhibitions. The curatorial visions write large upon the wall hid nothing. Only on one floor was there a sense of a conversation, of works and people working and speaking together. The so called ’roundtable’ (an architectural space built to host discussions) was starkly empty.

Amidst this muddle were some sustainably good works, things that continued to resonate long after my return to my grimy and sleazy gentleman’s hotel room. This top ten was one of the easiest I’ve done.

Two lonely individuals live out post-apocalyptic lives, in parallel times. One searching for the remnants of a past memory, and the other decoding a lost world understood only through material remnants. 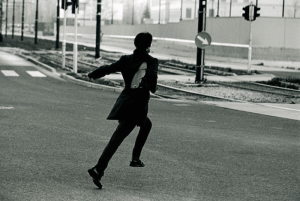 Its alarmingly easy to teach students about Foucualt’s ideas of surveillance and society in Wollongong – where the sense of being watched is still met with a slight distaste, or resigned indifference. To see the horrors and the fear of visibility played out on streets where to be seen has the potential for acts of true barbarism, is shocking, all the more so for the fact that this is simply a woman crossing a street. 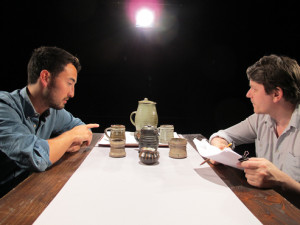 4. Simon Fujiwara Rehearsal for a Reunion(with the Father of Pottery), 2011.

A father and son conversation that begins with love and ends with destruction. Of pots. Of replicas. Of a history that leaped between countries. And an expertise beset by anxiety. 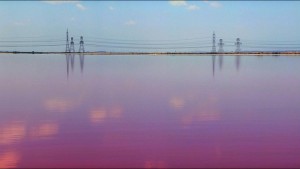 Some videos are felt rather than seen. The mysteries of the objects on the foreshore are some how resolved within various mirror states of self and other. The physical geographic location is present both now and in the future of itself. 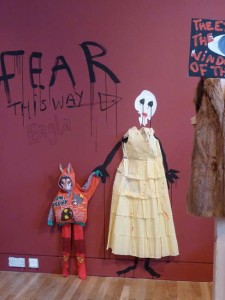 Unsure of the violence, or the coding of languages I simply did not know. I did understand this was a work that took me somewhere as brutal as Angela Carter’s fairy stories, and possibly more real for that. 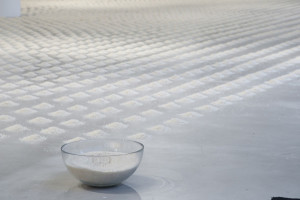 Inside Mugak-sa Buddhist temple it was impossible to separate these two works. Laib’s still piles filled a large space surrounded by Sunok’s smaller mediation rooms. The shifting hues of the rooms transformed the Ocean, colours travelled and moved. Both works somehow forced my body to the ground, to stand up was to occupy an unnecessary amount of space. 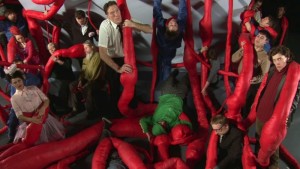 Wagner’s total work was a fascist machine, where the devices of the illusion were hidden within a mystic gulf. Chto Delat expose the conspiracies of epic theatre, beneath which strange organic forms entangle the well be-suited chorus line. The surreal layering of hyper-capitalism with apparently communal decision making strategies is compulsively addiction. 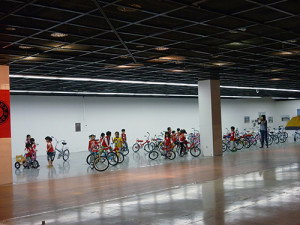 There is something extraordinary about walking into a room and witnessing small groups of Korean children charging around on bikes from Dunedin. Eady’s 100 bikes project grew from the small scale and local, into something still local (all the bikes here are recycled from local bikes) but somehow now about negotiating vast global spaces. As I left for the day I watched a small child charging off over the forecourt on a purple tricycle, weaving deftly beneath Tiravanija’s ping pong tables, I don’t think they were going to bring the bike back ….